I’ve tried a lot of note-taking applications, but I still find myself returning to Evernote. Not even Notion could win me over.

Evernote just feels more polished — I’m not sure whether it’s because I’ve been using it for what feels like a lifetime, but the process of opening it up and taking a note feels natural and seamless. It’s also more secure; I have no worries about storing semi-sensitive information in it, thanks to tools like two-factor authentication and passcode protection. You can even encrypt text within a note, requiring an additional password to see what’s under the cover. Plus, staff don’t have access to your data.

As an iPhone and iPad user, I’m also a huge fan of the Evernote widget. Having the option to create a note and upload a photograph, from the lock screen, without having to unlock the device and find and open the application makes it feel so natural. There are a lot more steps required to do the same on Notion. You need to open it up, track down the individual page, then find where you want to create the note. Evernote makes it easy to create in a hurry, while the idea is still fresh in your mind.

But that’s just scratching the surface. Evernote offers several other features, albeit to Premium members, that Notion doesn’t bring to the table, including but not limited to the option to save notes for offline access, annotate PDFs without having to download additional software and best of all search for specific text within Word documents and PDFs. The membership, which costs $8 per month, also lets you upload up to 10GB in files per month with a 200MB maximum note size.

Sure, Notion doesn’t have such strict limitations on uploads. Free users can upload as many files as they want, but there’s a cap of 5MB per file, while paid subscribers can upload as much as they want, with no restrictions on file size. But that doesn’t matter. I’m not saying Evernote is the best all-round workspace software. I’m saying it’s the best note-taking application. Most people shouldn’t need to attach more than 200MB in a note — enough space for a handful of documents, receipts or business cards. 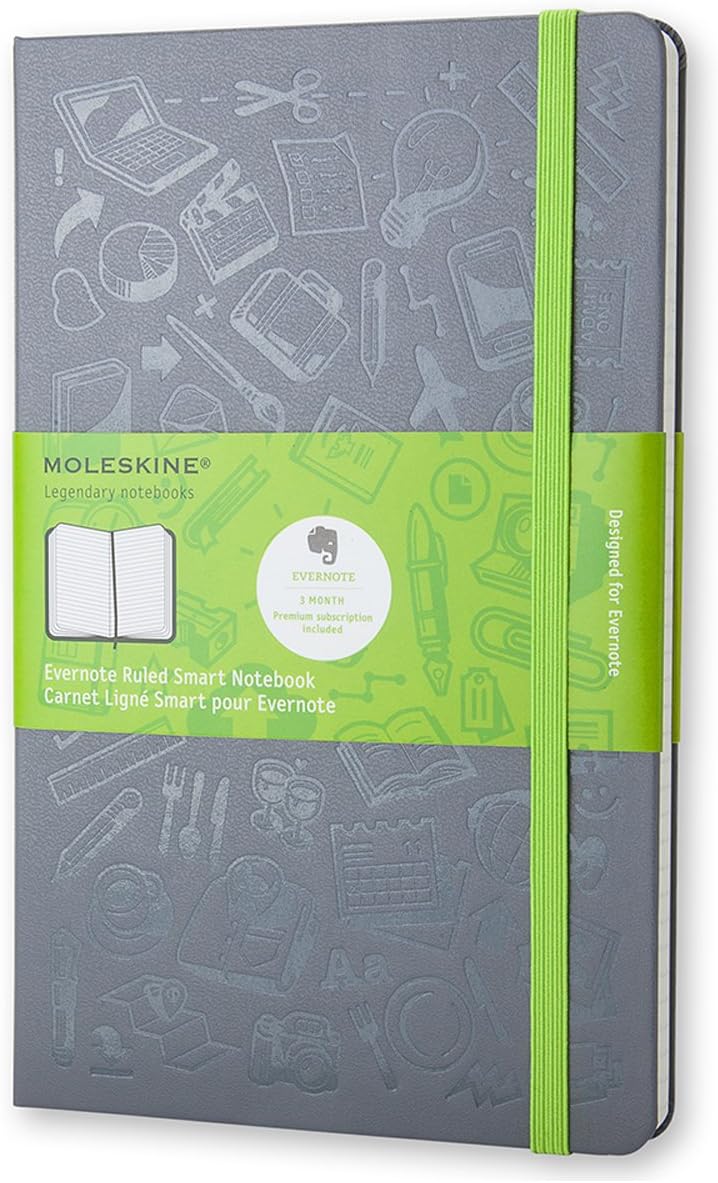 One of my favorite things about Evernote is the Moleskine Evernote Smart Notebook. For those who haven’t heard of it, it’s a traditional analog Moleskine that once paired with the Moleskine Pen+ can digitize all of your freehand notes in real time. But I don’t use it for that. Instead, I take advanced of Evernote’s Page camera feature to capture the pages of my notebook and store them in Evernote. It’s a bit more manual, but it’s cheaper than paying out for the whole Moleskine smart setup.

Notion vs Evernote: Ease of Use is Key

What I’m trying to say is nothing compares to Evernote when you’re wanting to create a quick note while you’re out in the trenches. For me, it serves as an inbox for anything I need to store or remember before I sit down to organize it, and inevitably store a copy in Notion, every once in a while. I can’t see this workflow changing until Notion levels up its existing application or releases a dedicated, purpose-built version for note-taking, and that won’t happen anytime soon.

Of course, Evernote is just one of the many Notion alternatives out there. If you’re keen to move away from Notion, for whatever reason, we recommend pairing Evernote with a Kanban-based project management tool like Trello to stay organized. This way, you have a dedicated note-taking application and a standalone solution for building lists and breaking down projects. Although, if it’s a simple to-do list you’re after, you can do this inside Evernote thanks to its checkbox feature.

When it comes to customization, there’s no beating Notion. The sheer level of flexibility you have is out of this world. You can form relationships between different pieces of content, and there’s no shortage of Notion templates that’ll help you find inspiration. While there are Evernote templates out there, there’s nowhere near the same selection as what’s on offer for Notion, and that’s because Evernote doesn’t have the same feature set: It does one thing, and one thing well: Lets you take notes.

Notion vs Evernote: The Verdict

If it’s note-taking you’re after, Evernote sits at the the head of the table, ruling the roost. Notion, with its limited skillset when it comes to taking notes, can’t compete with Evernote — which lets you save notes for offline access, encrypt entire notes or individual blocks of text, annotate PDFs without having to use aftermarket software, and search for text within Word documents and PDFs to name but a few features. But for everything else, like building an entire productivity suite, Notion is king.

Notion vs Evernote: Reasons to Switch from Evernote to Notion

In our Notion vs Evernote comparison, we concluded that Evernote is the best note-taking tool — but that doesn’t mean you shouldn’t consider switching from Evernote to Notion. If you’re using Evernote for more than just taking quick notes while out and about, here are four reasons to consider making the switch to Notion.

Thanks to the recent release of the Notion API, you can now make connections between Notion and other online services, including Salesforce, Dropbox, QuickBooks and even Evernote. What stands out to me here is actually Evernote as if you’re keen to use its mobile client to take quick notes you can have them sync with Notion.

Due to Notion’s all-in-one approach to creating the ultimate digital workspace, it makes sense to try to do as much as you can in one place, creating the ultimate ecosystem. This simply isn’t possible in Evernote — it’s built for taking notes and not much else, so any form of integration with other tools is restricted.

Meanwhile, you can use connections with other services to automatically populate to-do lists based on Intercom and Salesforce entries, keep tabs on payments and orders with PayPal integration and even automatically create invoices in Quickbooks based the amount of work you’re doing for a particular client that you’ve logged in Notion.

Of course, comparing Notion to Evernote is like comparing apples to oranges. They’re two very different tools, but if you’re looking to achieve optimum productivity, consider moving everything to one location, and Notion is the best tool for the job, letting you take notes, and create databases, kanban boards, wikis, calendars and reminders.

2. There are No Device Limitations

Gone are the days of signing into Evernote on all of your devices at once for free. Now, you need to pay for that luxury. Free users can sign in on up to two devices. If you want to sign in on more, you’ll need to upgrade to an Evernote Personal subscription for $8 per month, discounted to $6 per month if you sign up for a year.

Meanwhile, Notion syncs across all of your devices for free. Seriously, you could be signed in on five, ten, fifty, a hundred or even a thousand devices at once and it wouldn’t bat an eye. That’s a bit extreme, we know, but our point is Notion won’t ask you to hand over a dime if you want to sign in on more than two devices.

3. No Cap on Total File Uploads and Note Sizes

Best of all, Notion doesn’t limit the total number of files you can upload to your Workspace per month. Evernote has a limit for all of its subscriptions: Free users can upload up to 60 MB in attachments a month, Personal customers can upload up to 10 GB and Professional can save twice as much at 20 GB.

If you’re using Notion, there is a slight catch: Free users can only upload files up to 5 MB in size, but there’s still no limit on the amount of them they can store in their Workspace. Upgrade to a Notion Personal Pro subscription, which starts at $4 per month but can be trialed at no cost with free Notion credit, and this limit is removed.

Just look at the Notion pricing structure and you’ll see we aren’t exaggerating: Notion will let you upload files as large as you want, and store as many of them as you want in your Workspace, whereas Evernote is capping the total upload at 20 GB per month for members subscribed to its most advanced membership.

Interestingly, Evernote also has a limit on the maximum note size for Free and Personal users: 25MB for the former and 200 MB for the latter; while Notion lets users create Pages as large as they want. This wasn’t always the case, but Notion finally removed the restriction for free users in May 2020.

Whichever way you slice it, Notion is a better choice for those wanting to collaborate. You can choose to share (either view or edit access) pages with other users, regardless of whether they have a Notion account or not, and you can invite them to collaborate on pages on a long-term basis.

Plus, Notion is designed to be used by workplaces, so you can collaborate on kanban boards, databases, create calendar events, assign tasks, and created shared resources in wikis. It’s what you’d get if you merged Google Docs, Microsoft Sharepoint and Trello — and Evernote just can’t rival that.

Evernote does let you share notes with other users and create, manage and assign tasks, but it’s clunky at best.

Don’t Ignore the Power of a Nofollow Backlink

Why I Don’t Pay for Notion Templates, and You Shouldn’t Either

How I Saved $755 Tracking My Monthly Subscriptions in Notion

Is Notion Personal Pro Worth it?